Welcome to the Zihuatanejo-Ixtapa PHOTO TOUR pages! These photos are mostly taken by me, and they include older photos showing some places that have changed and some people who are no longer with us.

Unless otherwise noted, these photos are my intellectual property. All are copyright protected. Their use for commercial or lucrative purposes without my explicit written consent is strictly prohibited.

You are welcome to use these photos as screen savers.

*NOTE* When you click on them, photos will open in a special window. 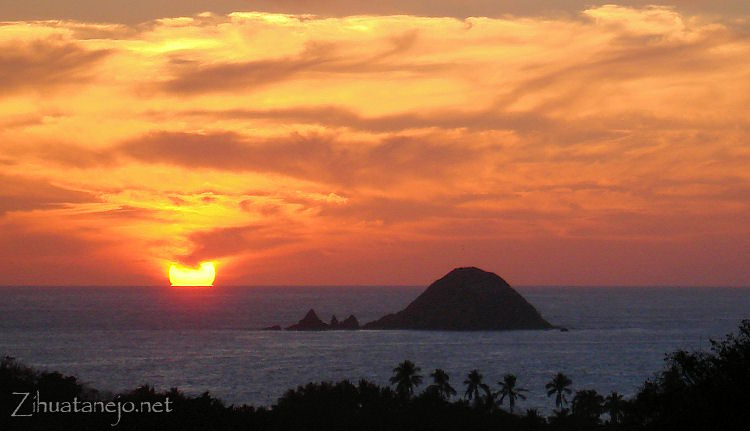 A masterpiece by Mother Nature. Sunset over Bahía El Palmar and one of the guano-covered islands in front of Ixtapa's hotel zone. There are no words... only sensations. 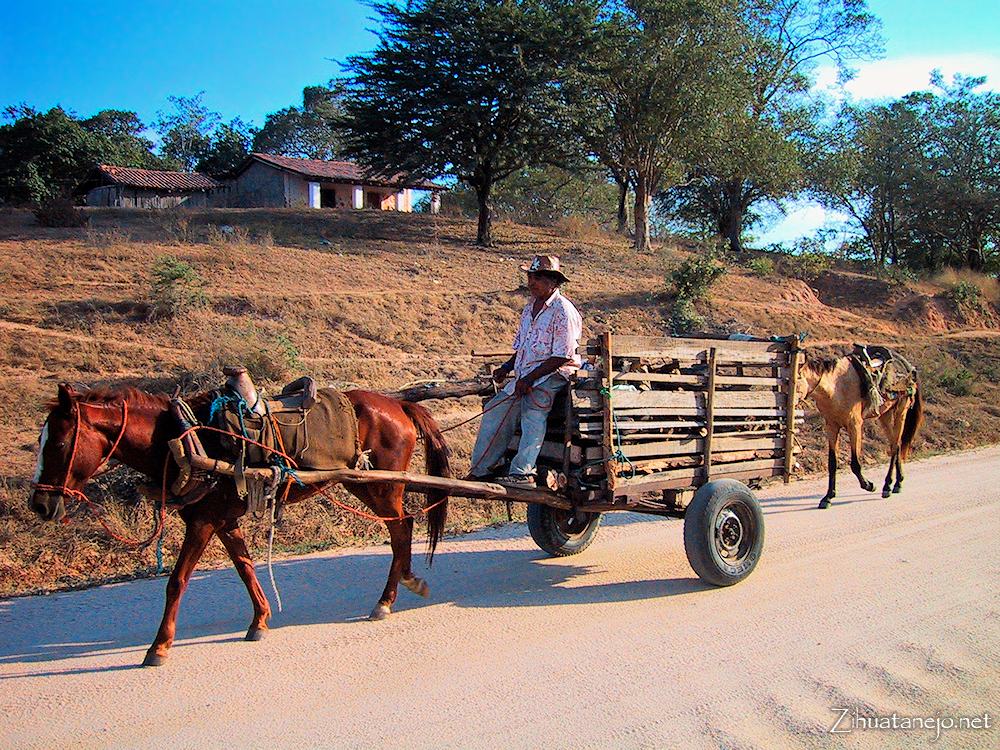 Time seems to stand still in Mexico, reminding us of a simpler way of life. This is still the way people get around in many small rural villages. Photo taken on the road that leads to la Barra de Potosí from Los Achotes. 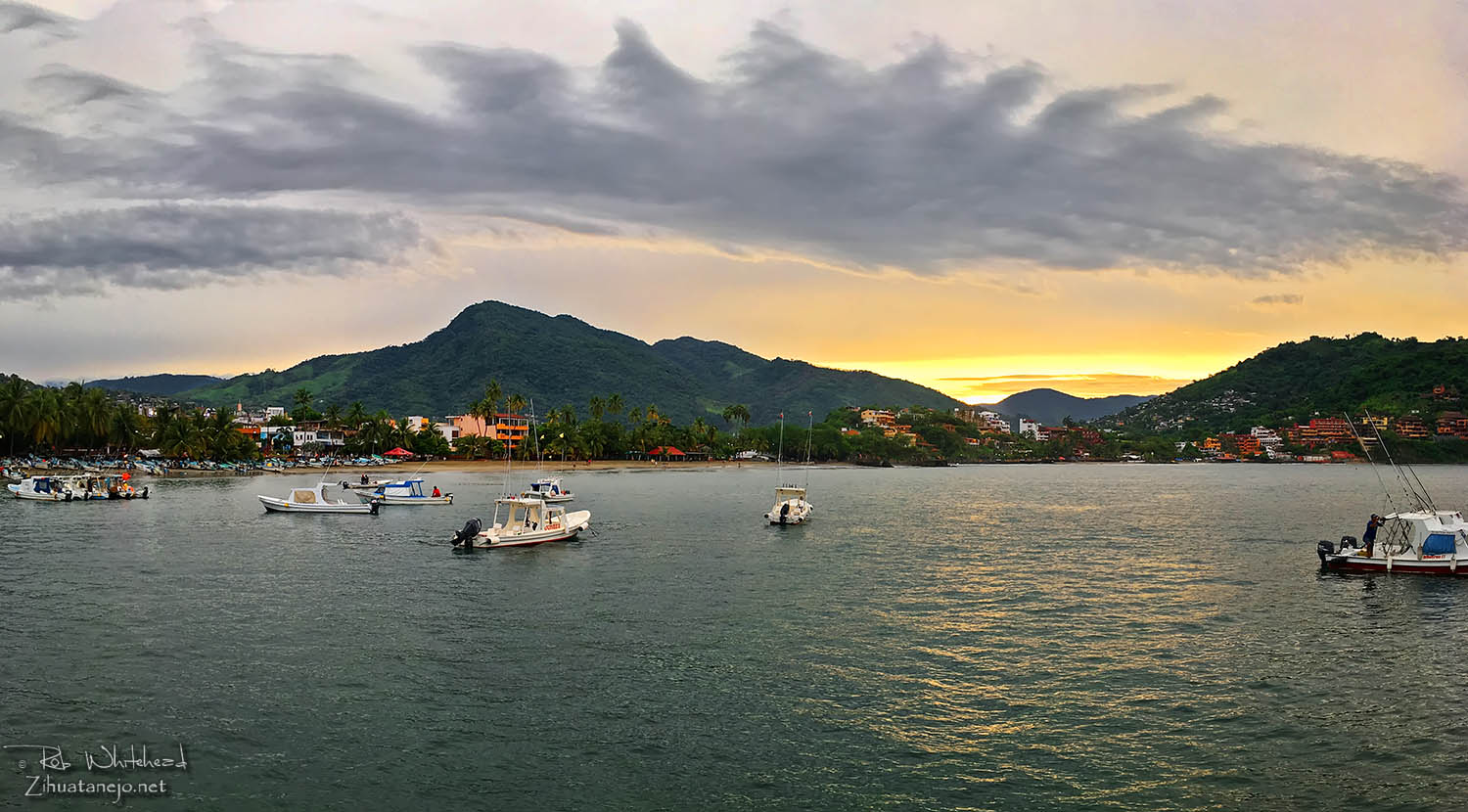 In this morning shot you can see both Playa Principal and Playa La Madera. The large hill is called Cerro Viejo. 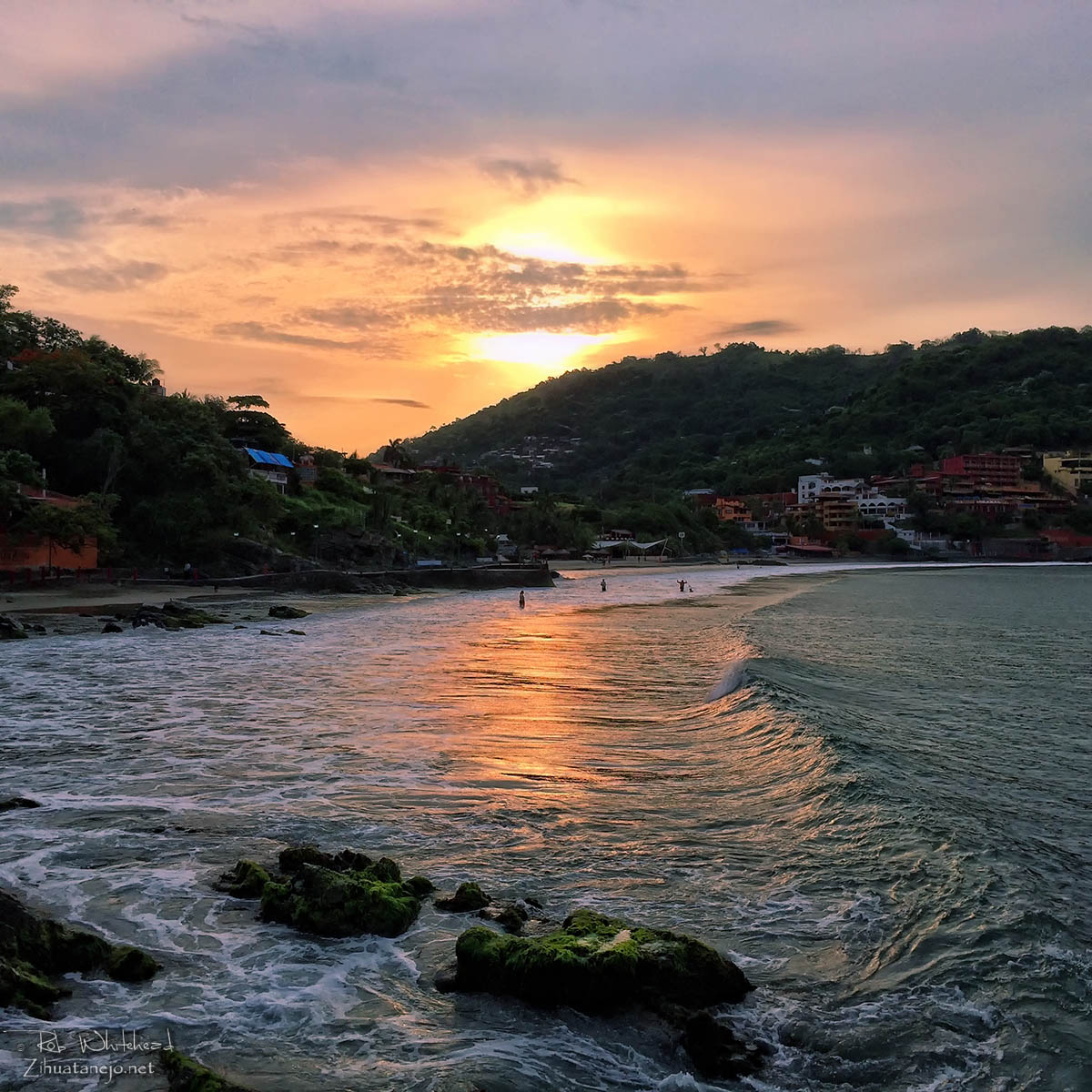 Bathers enjoying a refreshing sunrise swim at the side-by-side beaches of Las Manzanillas and La Madera.

A view of Playa La Madera from the end of the Municipal Pier. Vacation lodgings and restaurants cover the beaches and hillsides along the waterfront. 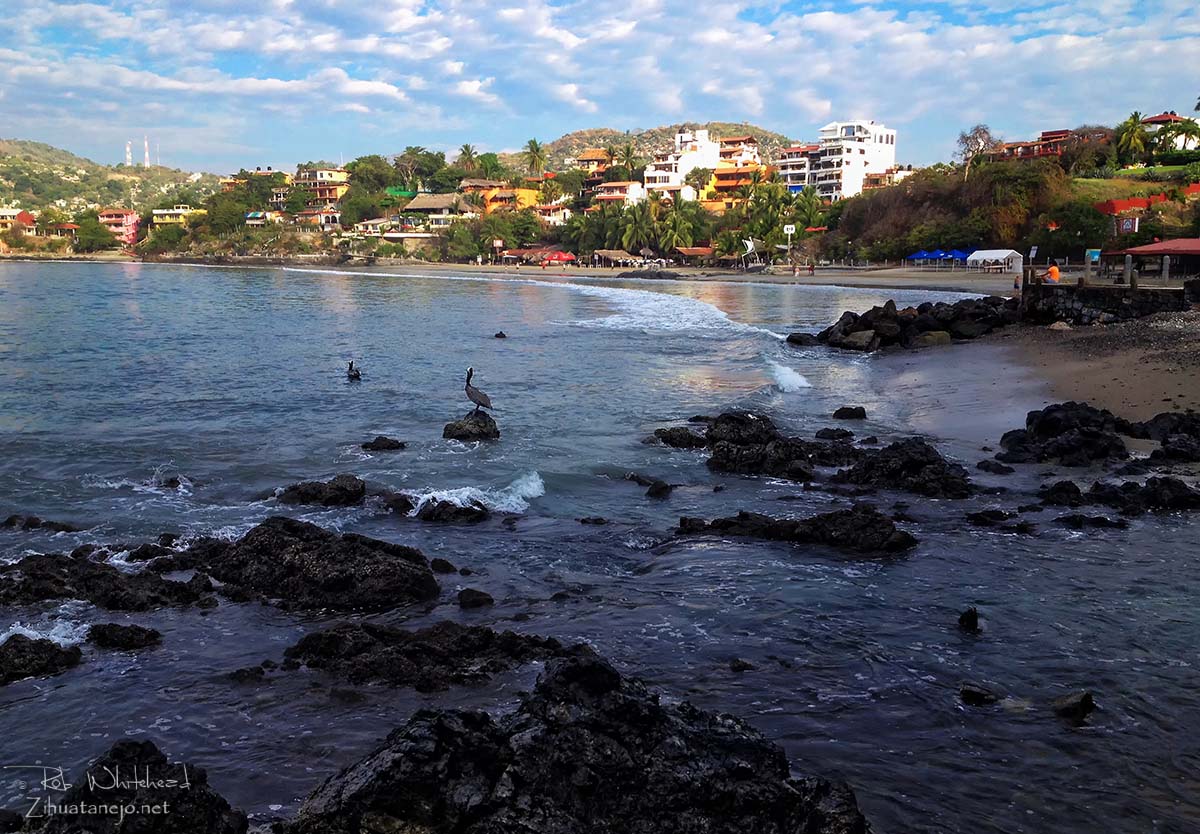 Looking northwest from the eastern end of Playa La Madera near the Hotel Irma as the morning sun begins to illuminate the beach. 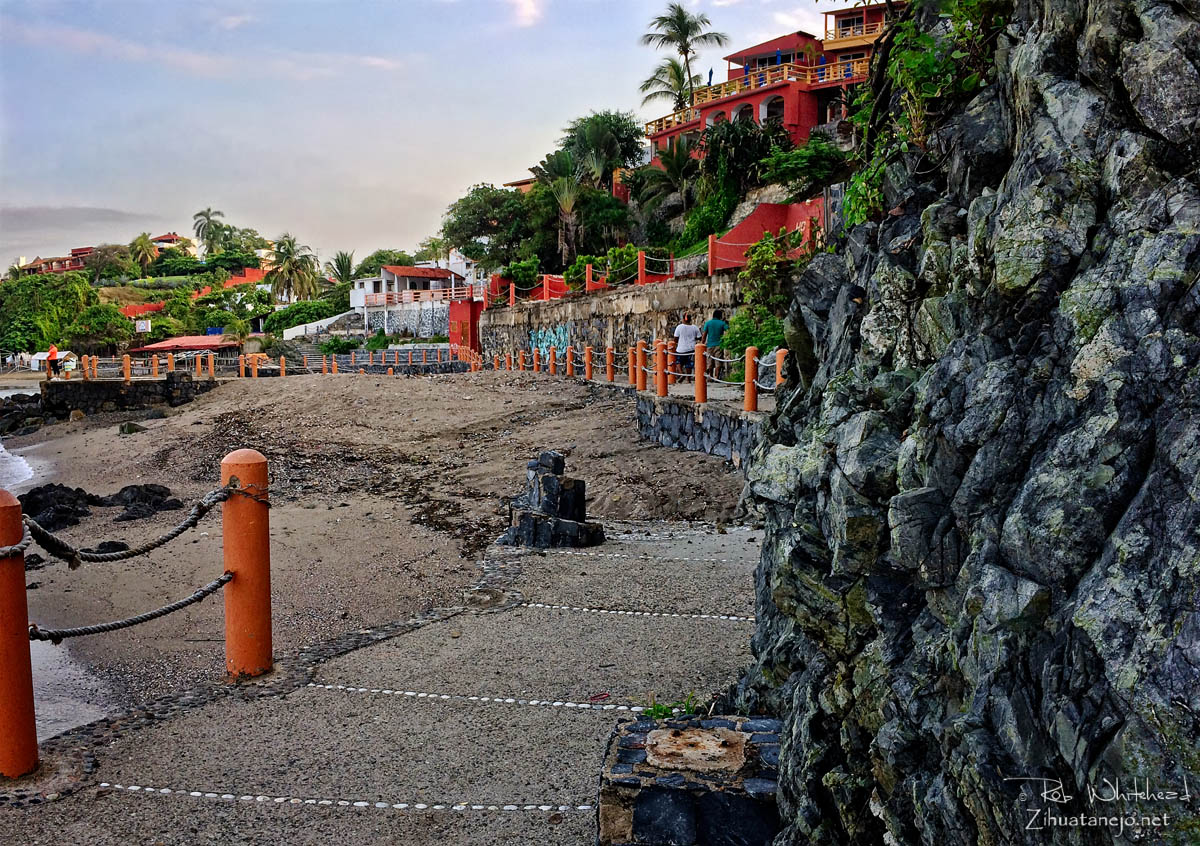 Part of the waterfront walkway in Zihuatanejo Bay known as Paseo del Pescador at Playa La Madera in front of the Hotel Irma. 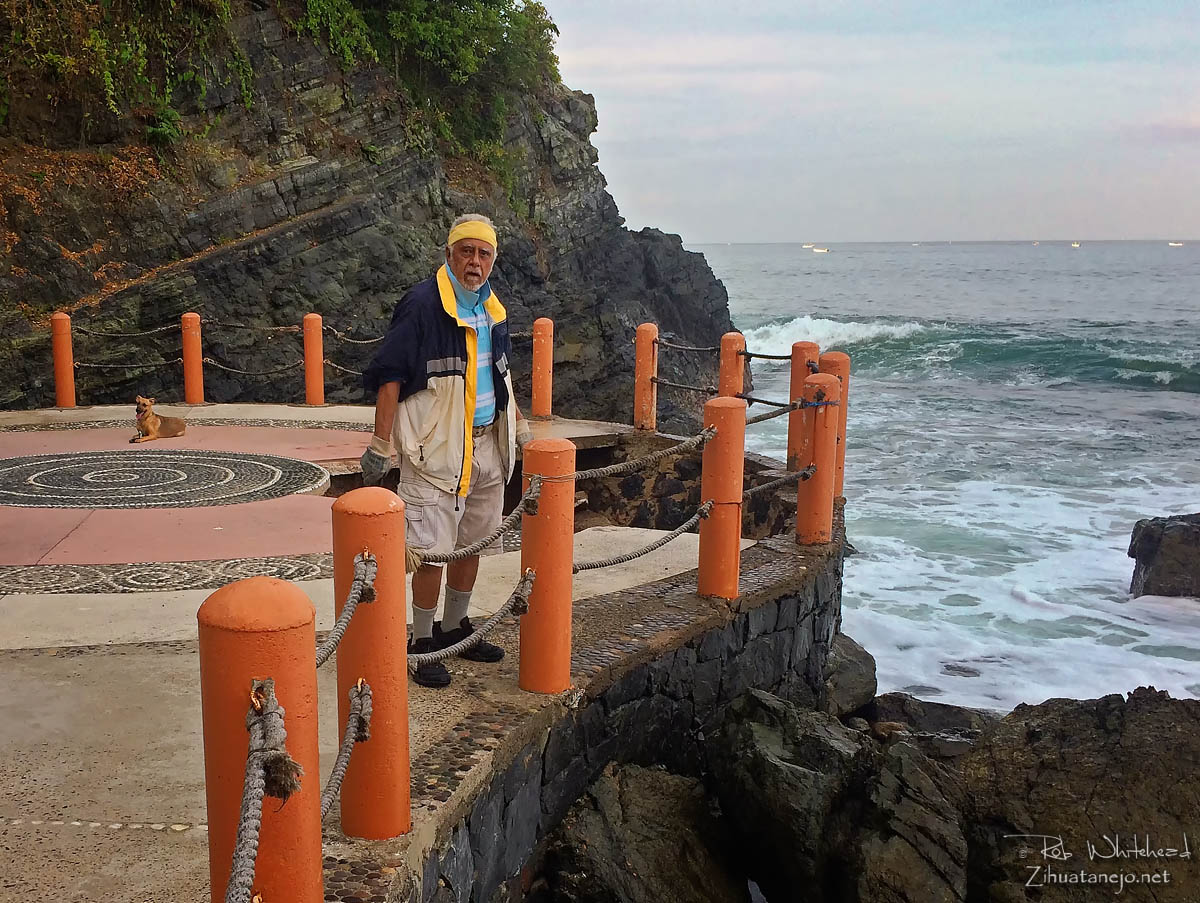 Unfortunately our local government fails to provide basic maintenance for the Paseo del Pescador, so this kind gentleman took it upon himself to fix the safety ropes where he can during his morning walks. Thank you! 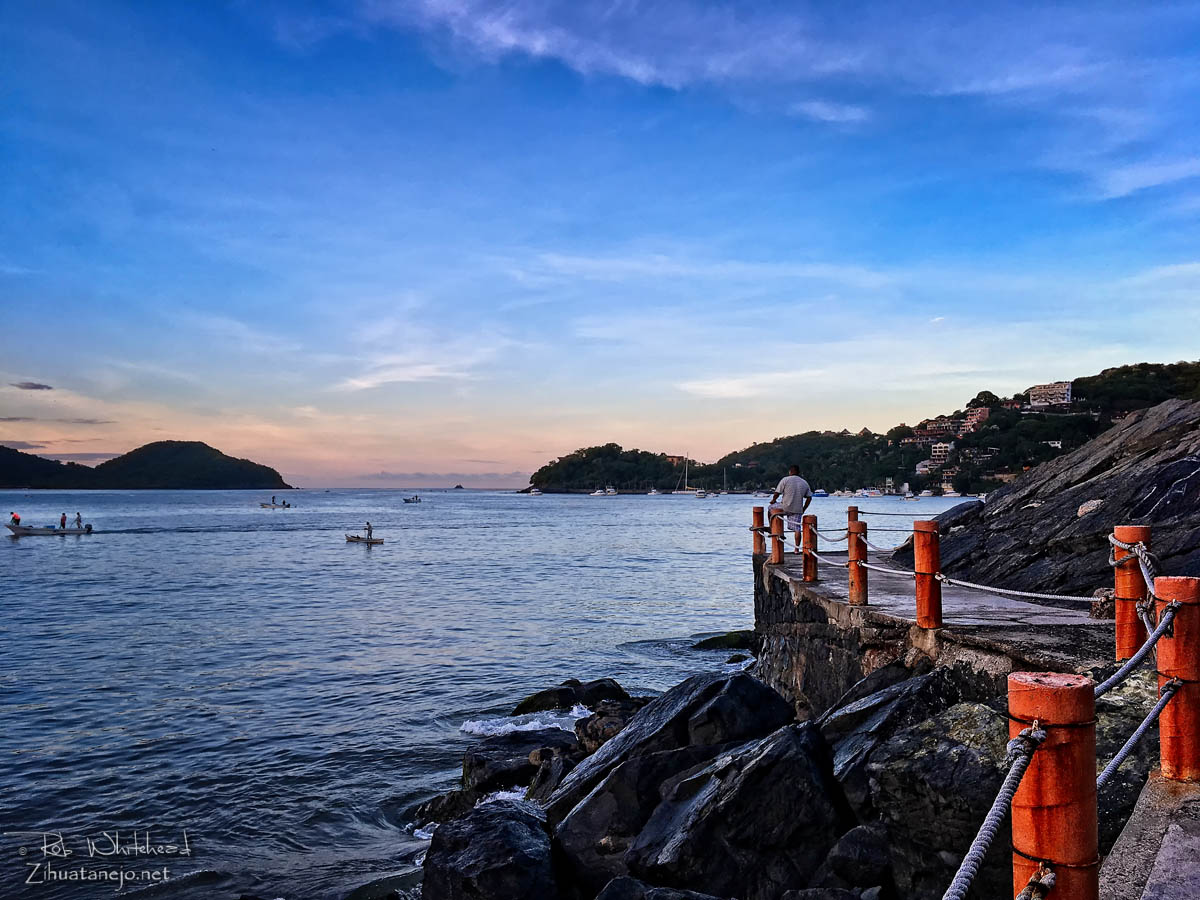 Fishermen working the bay seen from Paseo del Pescador at Playa Las Manzanillas, also known as Playa Caracol. The islet called Piedra Solitaria can be seen in the background about a mile outside the mouth of Zihuatanejo Bay.

Children enjoying a surfing tournament while their parents cheer them on at the eastern end of Playa La Madera during the morning.

A fishing boat passes close to the Piedra Solitaria during the late afternoon. A navigation beacon sits atop the islet located about a mile outside the mouth of Zihuatanejo Bay. 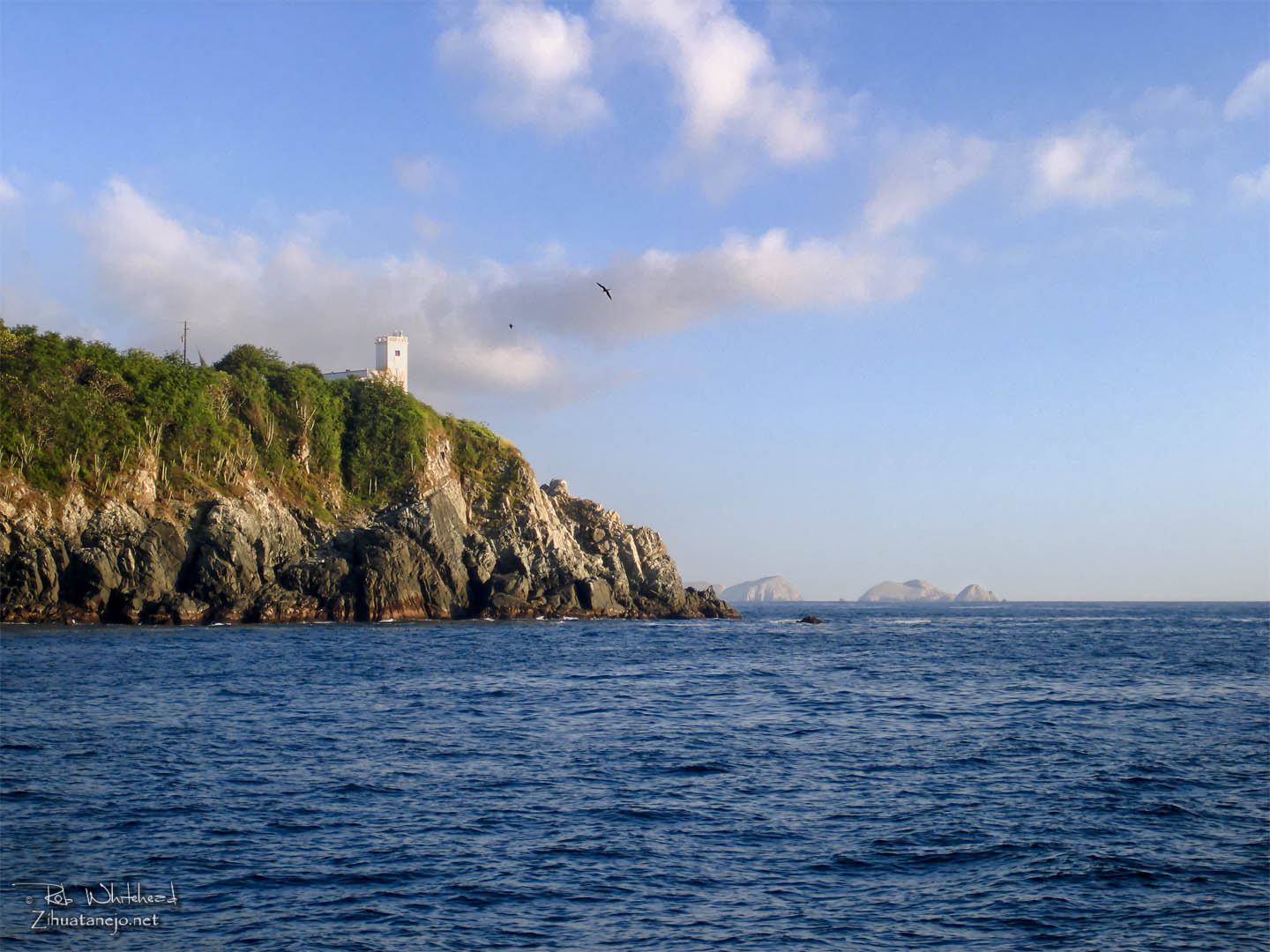 Located at the southeastern side of the mouth of Zihuatanejo Bay is the lighthouse known as El Faro, seen in the foreground. In the background are the guano-covered islands in Bahía de Potosí called Los Morros de Potosí.

The lighthouse known as El Faro sits at the entrance to Zihuatanejo Bay on the cliff known as Punta Garrobo. You can walk here from Las Gatas Beach. The view from here is spectacular!

Zihuatanejo is home to a small navy base for the Armada de México near the municipal pier. They are always there for us when we need them, and we are thankful for their reassuring presence. 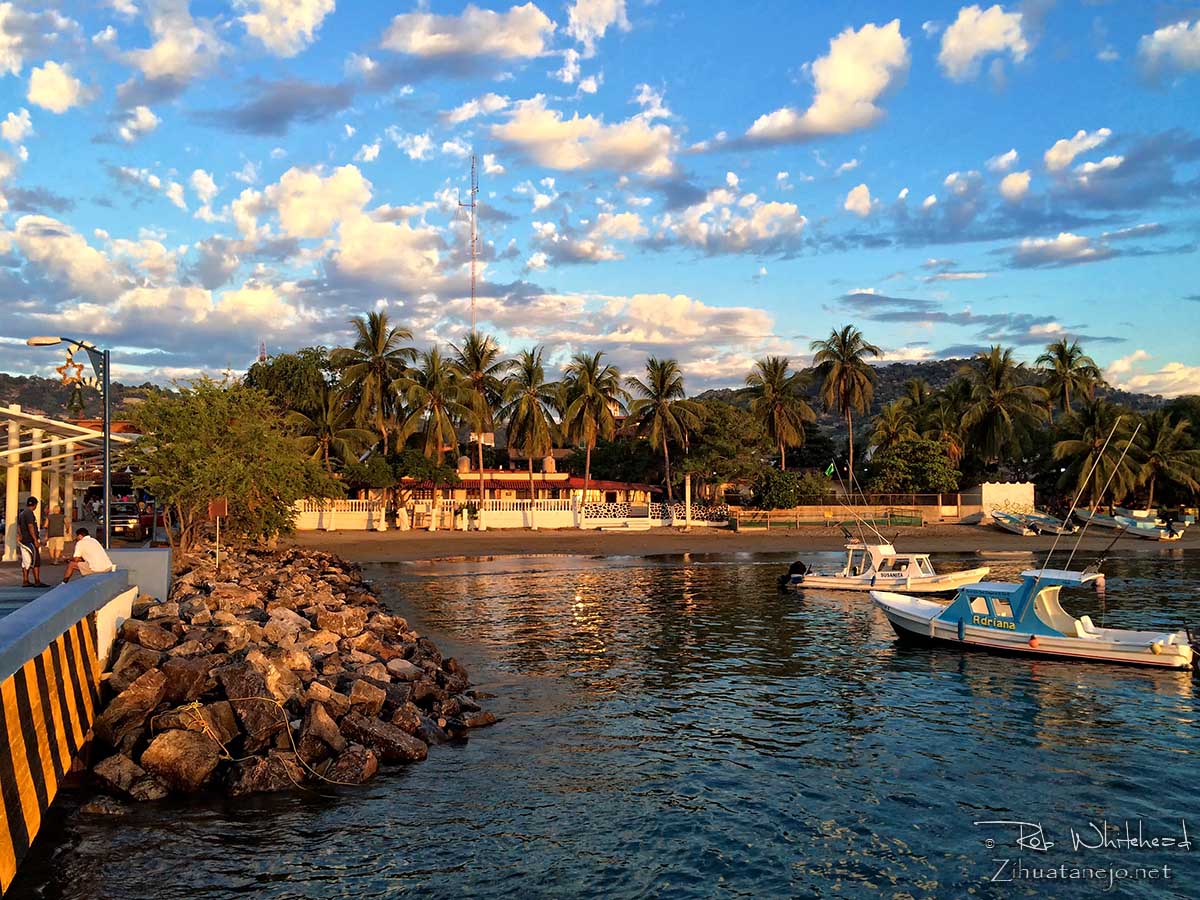 Part of the Sector Naval is located next to the municipal pier on the western end of Zihuatanejo's downtown beach. 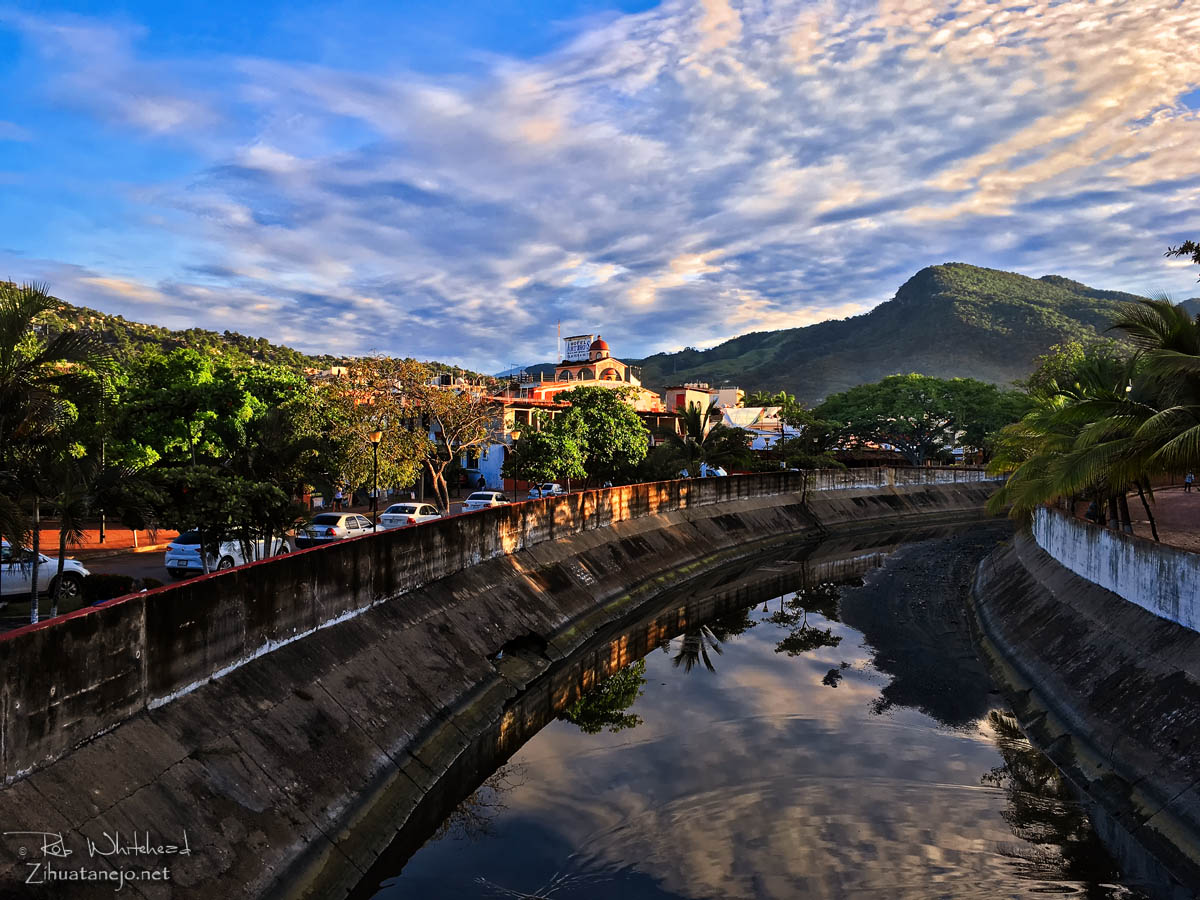 Looking north along the pluvial canal called La Boquita towards Zihuatanejo's iconic hill Cerro Viejo. This used to be a large mangrove estuary surrounded by a coconut grove. 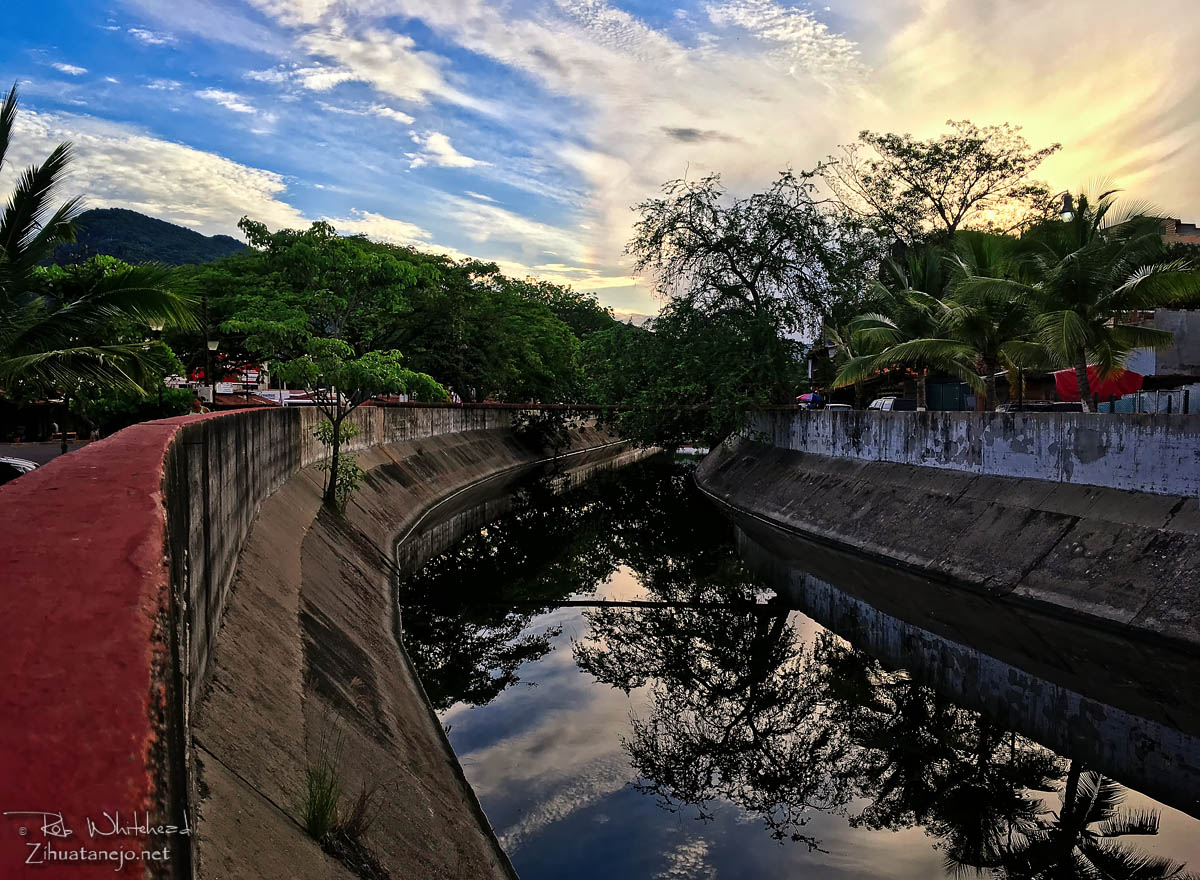 A little further up La Boquita Canal with Colonia La Madera on the right and Paseo de la Boquita on the left. Notice the young amate tree on the left side of the canal growing through cracks in the cement.

The mouth of La Boquita Canal, located at the eastern end of the Playa Principal, and the pedestrian bridge that crosses from El Centro to La Madera. 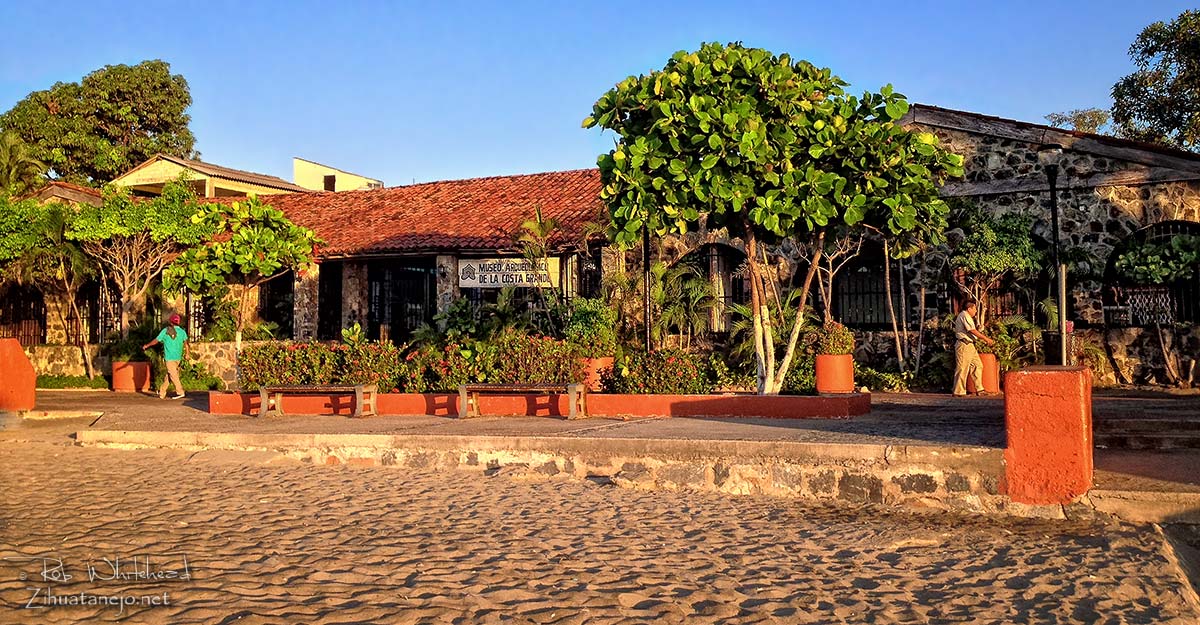 The Museo Arqueológico de la Costa Grande at the eastern end of Playa Municipal next to La Boquita Canal houses many relics and artifacts from Zihuatanejo's history going as far back as pre-Columbian times. Be sure to pay them a visit! 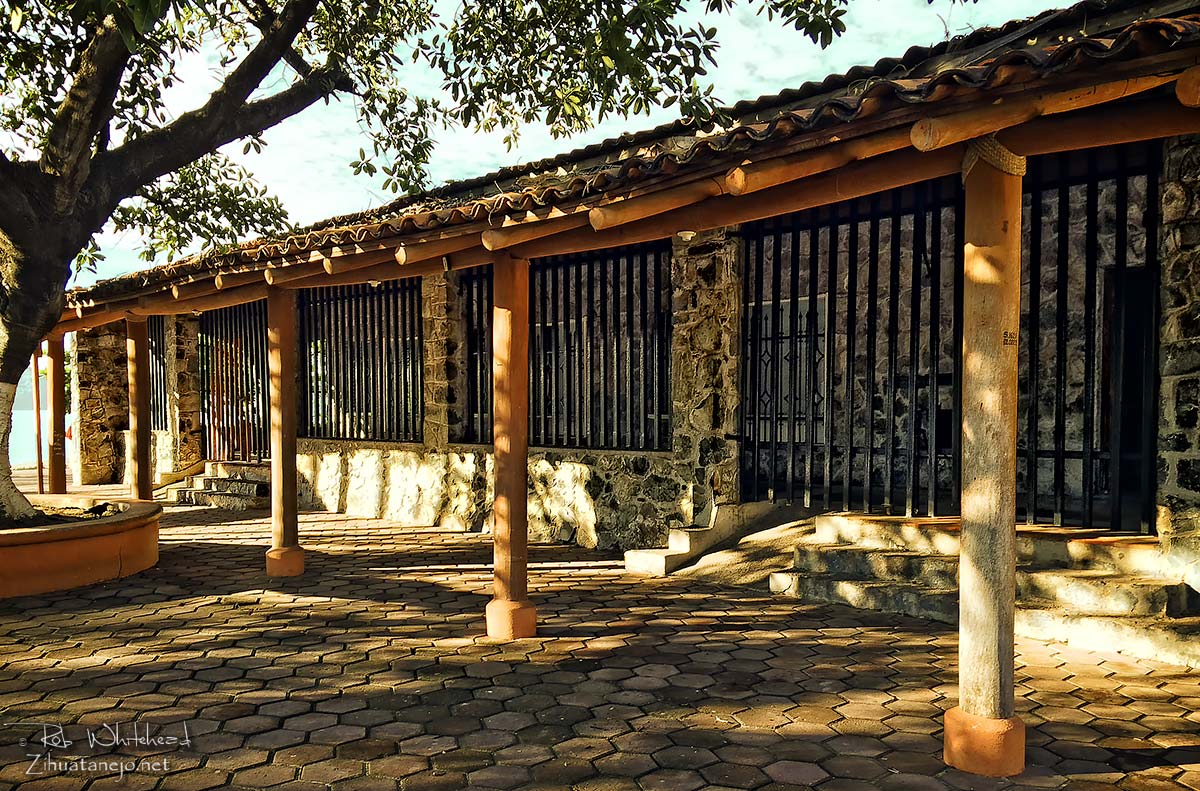 This is the eastern side of the Museo Arqueológico de la Costa Grande. Many years ago when it was the Palacio Federal these were all different government offices. 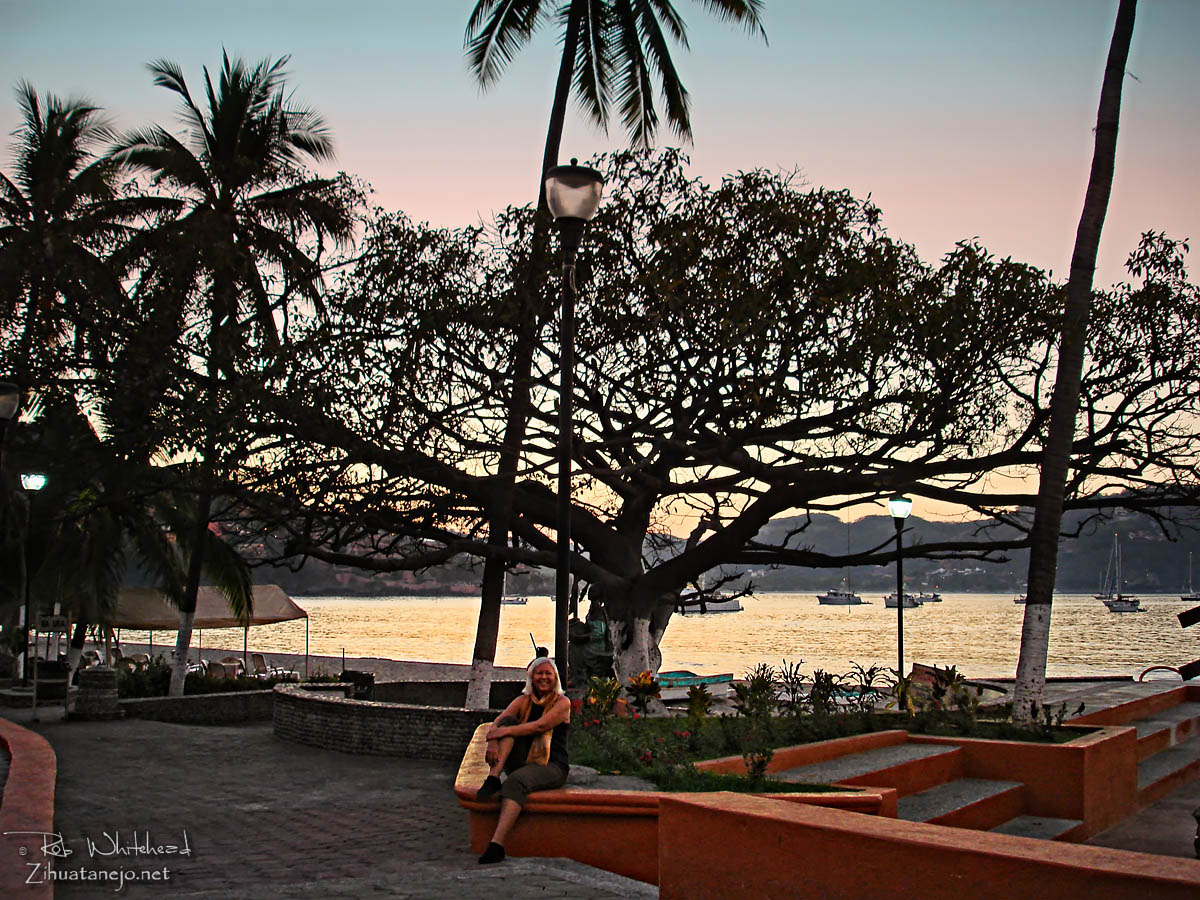 This old amate tree, unfortunately now gone, was one of 3 large amates that used to provide shade where folks gathered at the zócalo. It stood outside my wife Lupita's home when she was a little girl growing up here on Playa Principal where she was born. 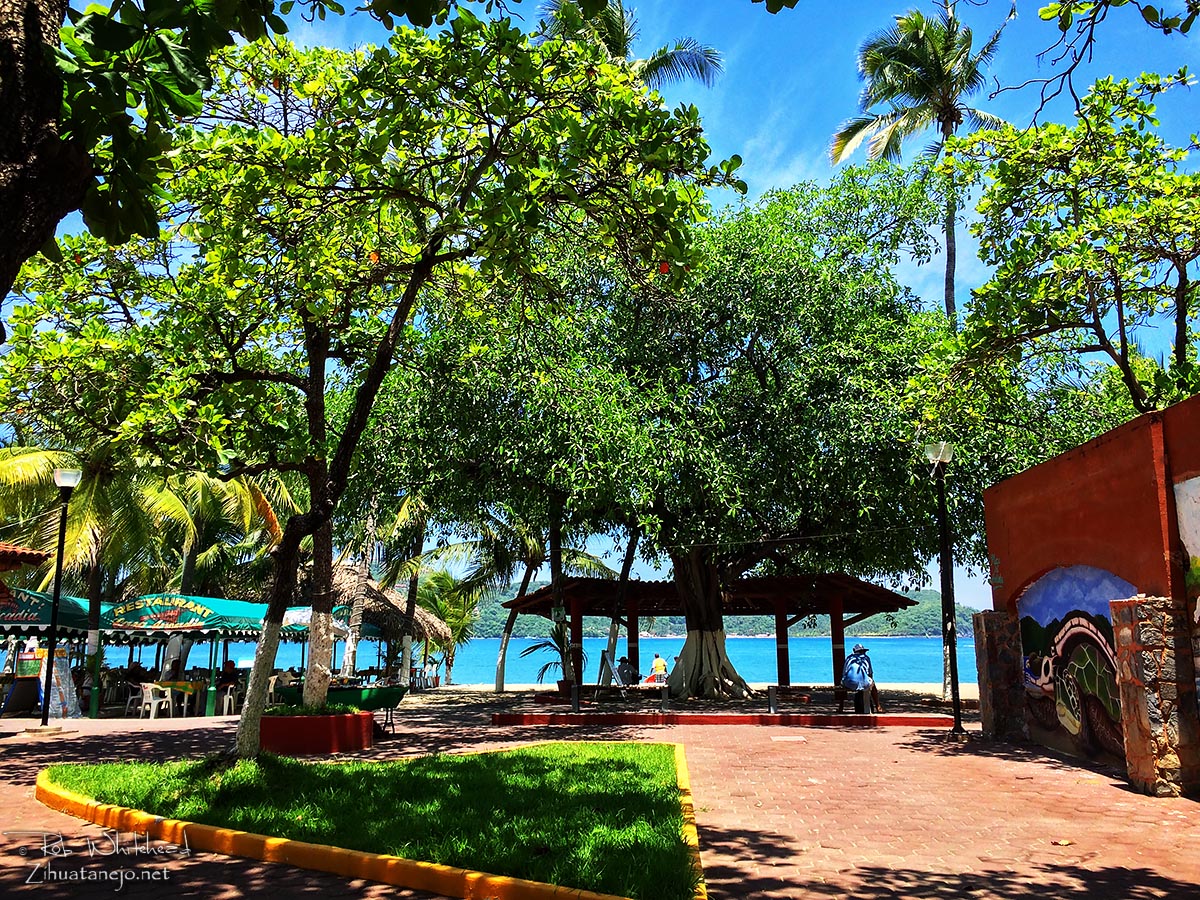 Amate trees are wonderful shade providers, but only a few remain along our downtown waterfront area compared to what there used to be. Here is one on the beach at Plaza del Artista in downtown Zihuatanejo. 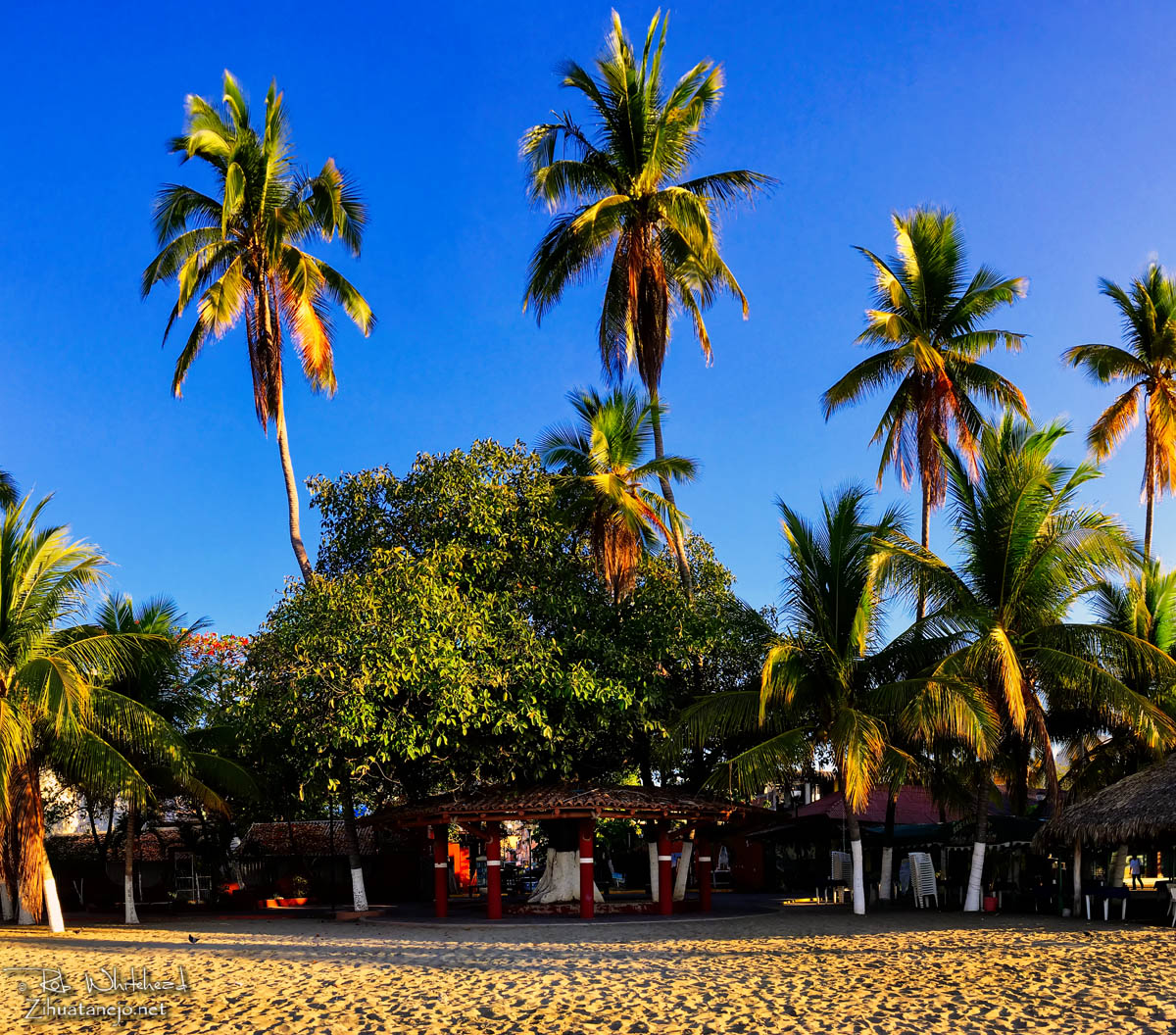 Here's a view from Playa Principal of the amate tree at Plaza del Artista. It is dwarfed by old coconut palm trees also growing there. Together they provide a great deal of shade that helps keep the area's ambient temperature down. 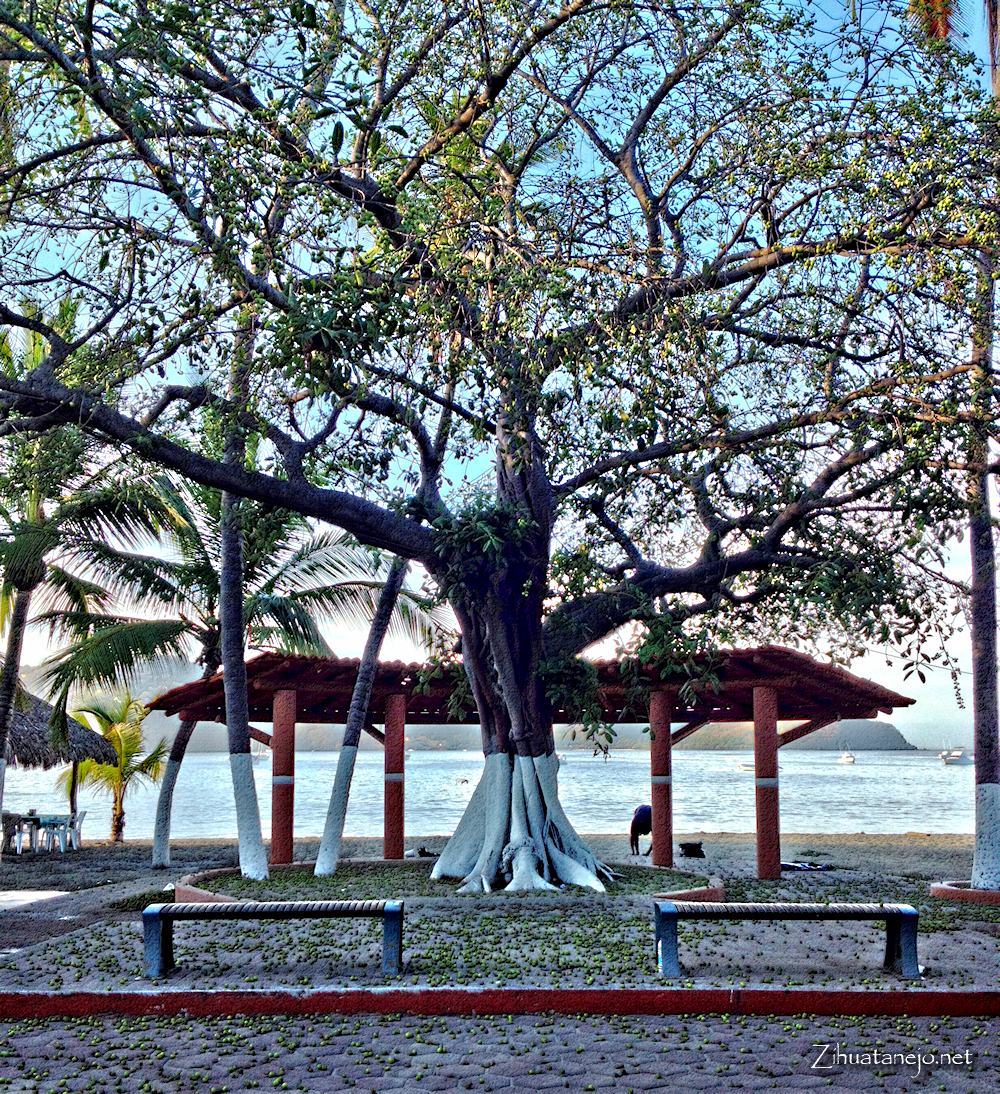 Amate trees lose their leaves and drop their fruit at certain times of the year. Fruit bats love them! Here a beachsweeper tries to remove several thousand figs that fell during one night, a task that was repeated over several days. 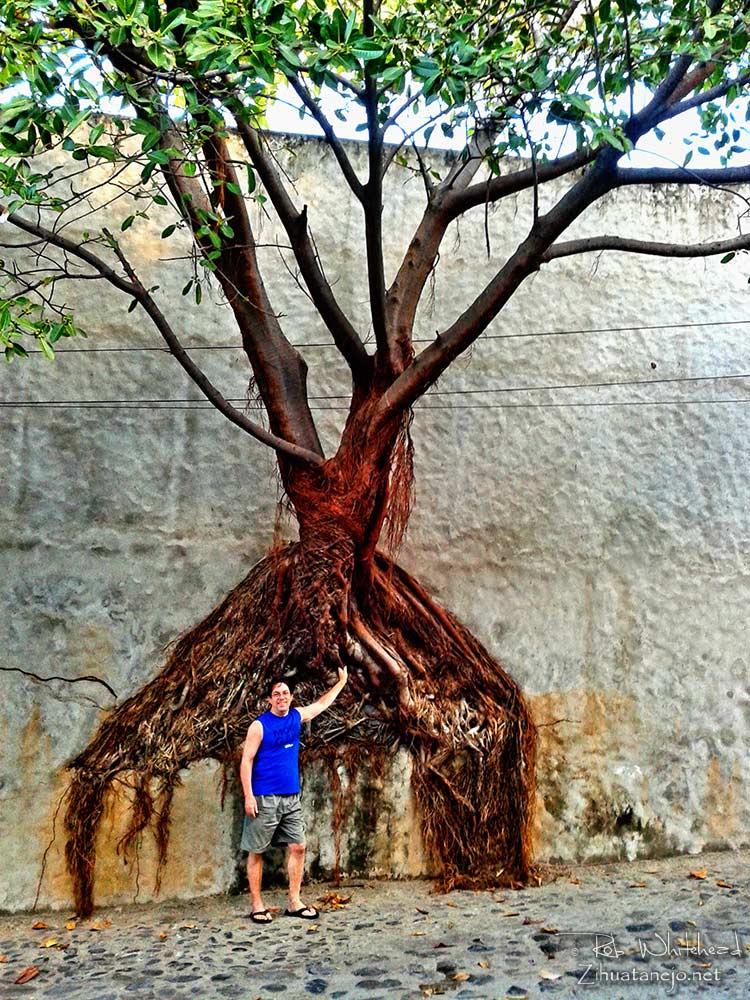 This amate tree grew for many years out of a wall along the road to the beach by the Hotel Palacios at La Madera Beach. Five months after this photo was taken it blew down during a storm. 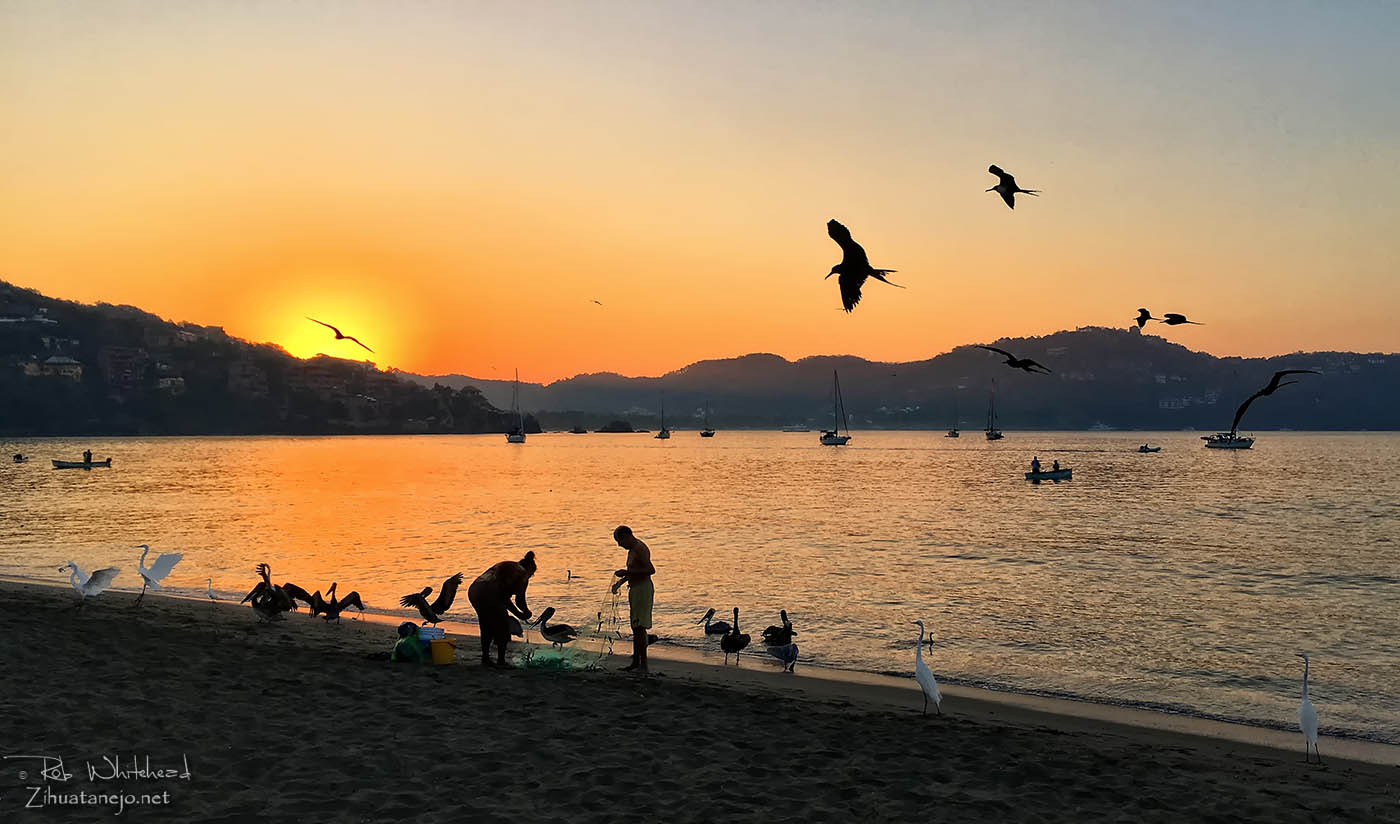 Pelicans, frigate birds, great herons, and cormorants compete for handouts from a fisherman and his wife on Playa Principal as the sun rises over Zihuatanejo Bay. 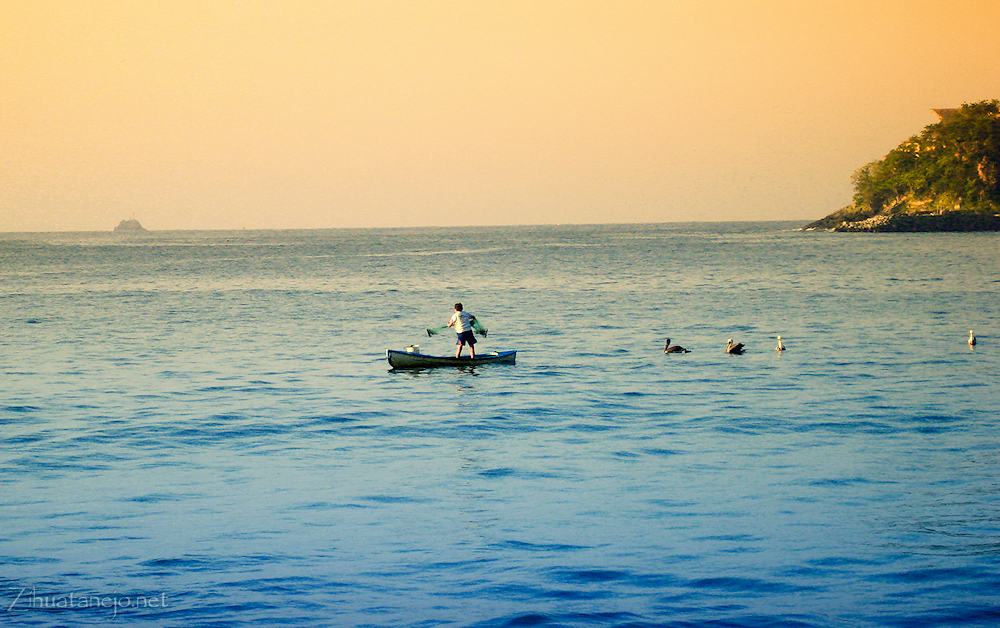 A fisherman prepares to cast his net from his canoe in Zihuatanejo Bay while pelicans look on. La Piedra Solitaria can be seen to the left in the background. 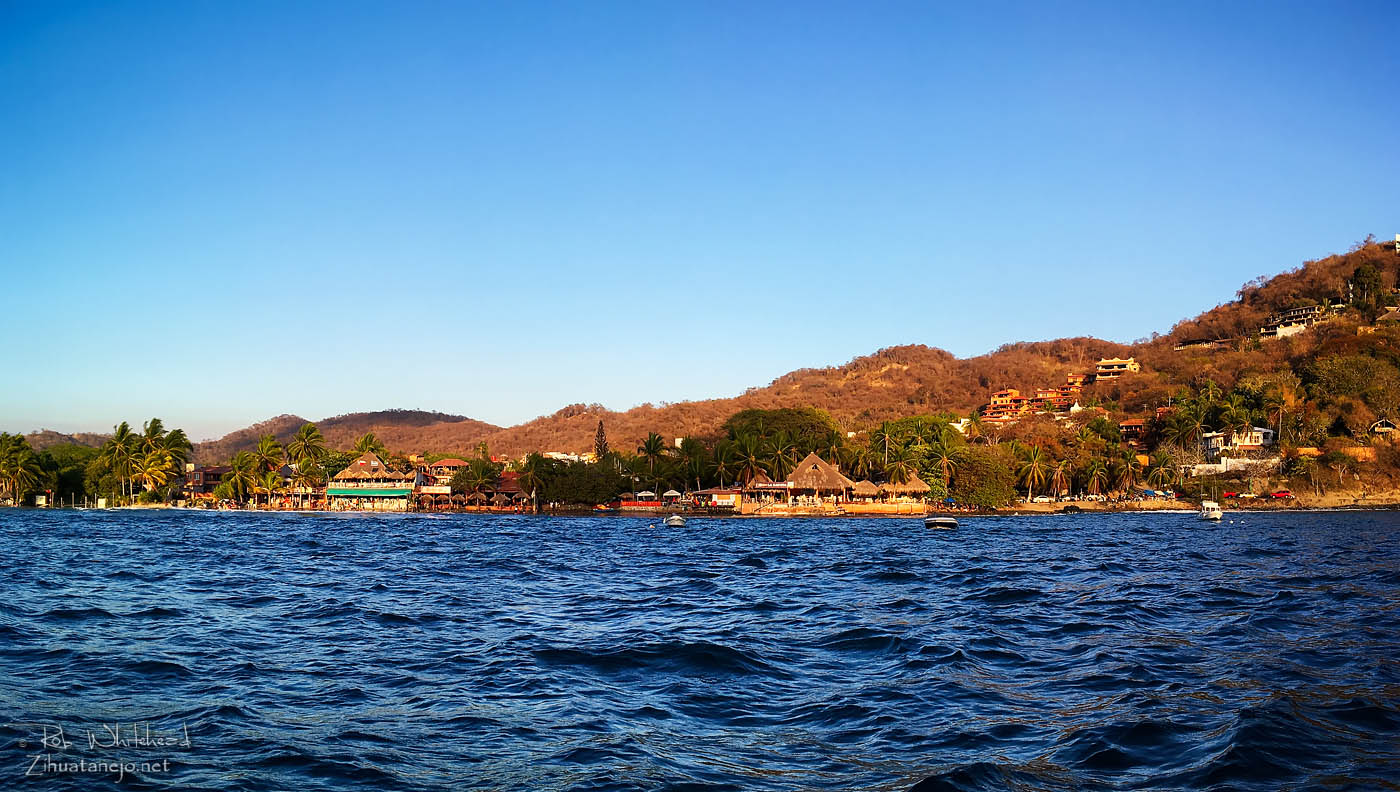 There is an estuary at the end of La Ropa Beach, visible to the left of the photo, and several restaurants.

The iconic hill known as El Cerro Viejo in the background. Numerous vacation lodgings are visible from the the hill between La Ropa and La Madera to the right to Las Manzanillas Beach to the left.

Here you see the coast between La Cala of Puerto Mío and Playa Contramar in El Almacén. 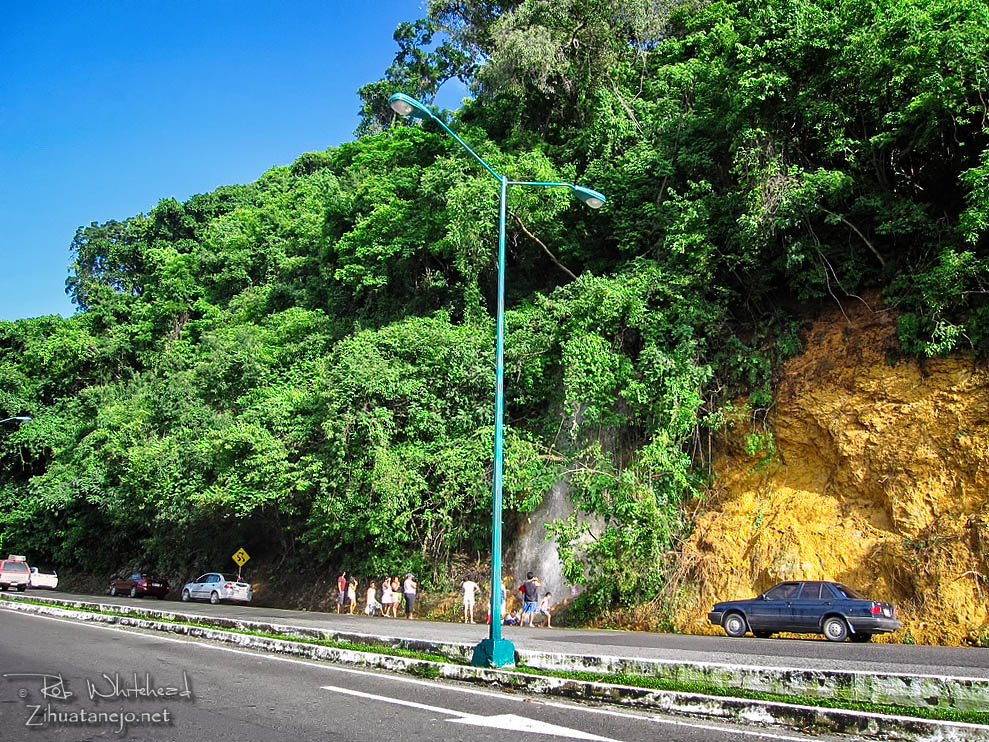 Usually (but not always) late in the rainy season a waterfall forms on the steep hillside in the northeastern part of Ixtapa Boulevard between Paseo de los Viveros and the turnoff to Zihuatanejo. 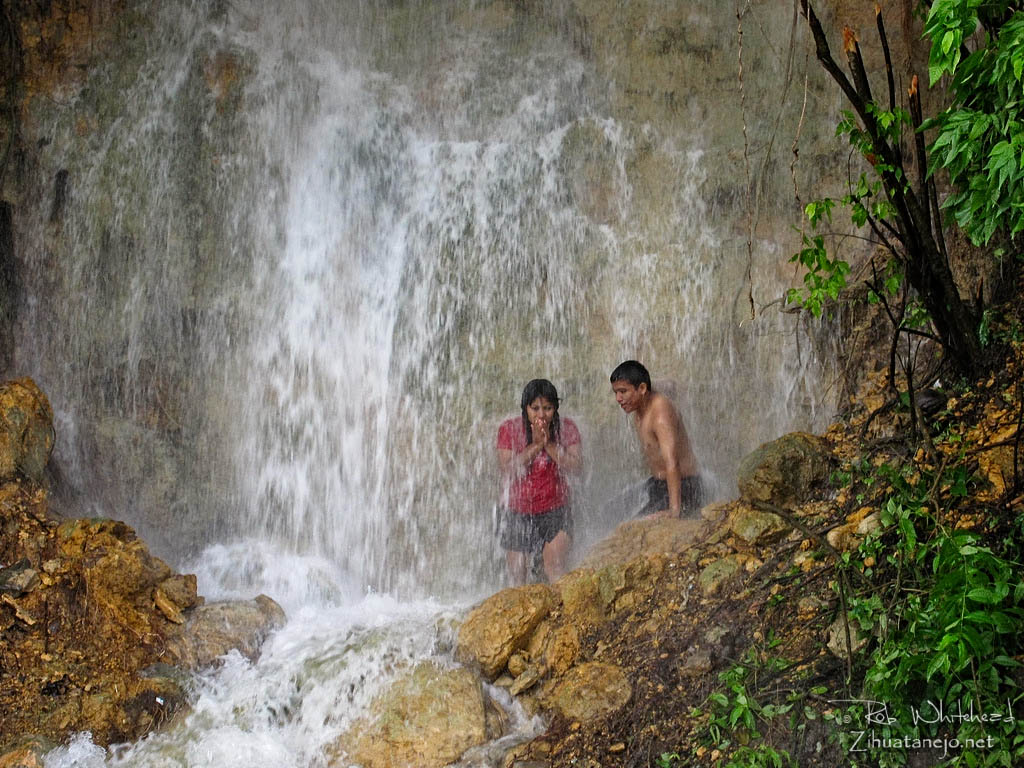 Drivers need to beware that couples and families stop on the roadside to bathe in the Cascada de Ixtapa. Waterfall bathers should beware of falling rocks. 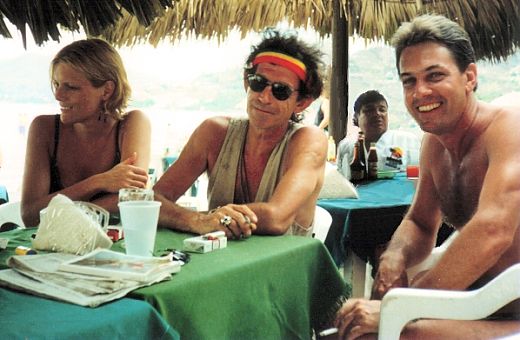 You never know who'll turn up in Zihuatanejo! Patti, Keith & me on Dec. 31, 1994 at Rossy's Restaurant on Playa La Ropa.